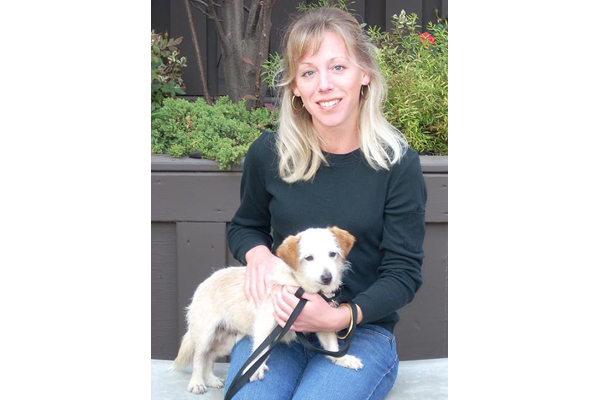 Groups of people hurried toward the entrance, pausing to admire the cats and dogs at play on the other side of the glass. Sharing the eagerness of those around me, I made my way inside the new PAWS Chicago Adoption Center for the opening reception. As I toured the facility, the welcoming, homelike atmosphere was everywhere–in the sitting area complete with bookshelves and fireplace, the serene rooftop garden, and, of course, the cheerful animal suites. Flowing throughout the Center was the distinct blend of joy and determination that has underscored every experience I’ve had with PAWS Chicago since joining the organization as a volunteer in 1999. Warmed by this mood and my surroundings, I found myself reflecting on my first encounter with PAWS.

Blame the Jack Russell Terrier; before him I wasn’t sure. I was an unlikely PAWS volunteer. I didn’t grow up around dogs, though I’d admired them with a sort of distant reverence. Always delighted to spend time with friends’ canine companions, I hadn’t considered making them an ongoing part of my own life. Until I walked past a curious Lincoln Park storefront on Clark Street in early 1999. In sharp contrast to the neighboring retailers and offices, this window revealed a gathering of dogs, some playing with human companions, some resting, all looking quite content on this particular day. I would pass by several more times before deciding to go in and investigate. The organization was called PAWS Chicago, I learned. They were hoping to build awareness about pet overpopulation and improve the odds of adoption for homeless animals by increasing their visibility. And yes, they were taking volunteers. I signed up mostly because walking and playing with the dogs sounded like a fabulous activity. The larger cause, I fully confess, was quite secondary at the time.

I showed up the first day feeling a bit like a student starting a new school. What would the dogs think of me? Would I fit in with the other volunteers? Following an informative orientation, I headed across the room to the dog crates, greeting the occupants and reading their bios, before I settled into a metal folding chair to survey my surroundings. Not thirty seconds passed when the Jack Russell Terrier appeared at my feet and catapulted himself from the floor into my lap, front paws thrown over my shoulder. The other volunteers laughed at my surprise. He was ready for a walk and had apparently selected me for the task. As I secured a signature, goldenrod scarf around his collar and located a leash, I saw that I did have something to offer here. When we returned from our walk, I signed up for a weekly shift.

In the weeks to come, I was amazed by the number of visitors stopping through. Many had heard about the program and wanted to adopt, but others just happened by as I had, intrigued. Both inside the center and outside–on walks around Clark and Fullerton, led mostly by enthusiastic, scarf sporting mixed breeds, or at Angels with Tails events–people approached wanting to learn about the cause. My own explanations, I observed, gradually became more detailed as my knowledge and passion increased.

I continued brushing coats, straightening scarves, and filling water bowls, expanding my participation in Angels with Tails and special events when the dog adoption program on Clark eventually concluded. Traveling throughout the Chicagoland area, I met the Husky with the sorrowful eyes on Oak Street; the tiny, tiger striped terrier pup in the mall; the gangly black shepherd mix on Armitage; the Weimaraner litter at the Fur Ball; and the exuberant Australian Cattle dog in the suburbs, among so many others. Shopping trips slowly became like scrapbooks, filled with recollections of dogs I had chaperoned weeks, months, or even years prior.

Spending the day among dogs and designer clothing always seemed nearly too good to be true. Especially on those occasions when just the right adopter came by, and I witnessed that special connection, that unique bond between human and canine. Even though it often meant giving up my charge for the day, these experiences became one of my greatest joys as a volunteer.

Making my way through the new Center, peering into the suites at the precious occupants, I could hardly believe eight years had passed since I signed up to volunteer. Even more stunning was the incredible evolution of PAWS Chicago during that same time. So much had changed since I first walked into the modest storefront on Clark Street. Even so, that same, persistent mood clung to the air–joy and determination; hope, perhaps. As tails wagged throughout the suites, I made my way back outside, filled with anticipation for the next eight years.