PAWS Chicago was founded with a single aspiration.

One by one, we can mobilize people to help homeless animals.

And, one by one, we can save pets at risk of euthanasia.  But first, people needed to know the truth about the mass-scale killing of homeless pets. In 1996, there was no public consciousness about these animals. People were not aware of pet overpopulation. They certainly did not know the vast majority of homeless animals were being killed.

PAWS founders Paula and Alexis Fasseas’ awareness moment only came after they rescued a stray dog they named Pippen from the Greek island of Crete in June 1996. Pippen would have been poisoned once tourist season ended. The Fasseas family was shocked Greece would treat its animals with such cruelty. Pippen’s story inspired Alexis to help homeless pets back home.

As a high school sophomore, Alexis signed up to volunteer at a local animal shelter to fulfill her community service requirement. She was shocked when she learned that instead of saving pets, the shelter was replacing basic medical care with euthanasia. A simple sneeze was a death sentence.

Over the next two years, Paula and Alexis saw the terrible story of mass euthanasia of cats and dogs repeatedly. First, when they visited the city pound (Animal Care & Control) for the first time. Again, through a May 1997 Chicago Sun-Times article that revealed more than 40,000 pets in Chicago were being killed each year.

From an Event to a Movement

On May 30, 1998, PAWS Chicago was launched with an adoption event, Angels with Tails. The message that homeless pets needed to be saved was taken to the public. The event was held on the streets and in the boutiques of the Magnificent Mile where local businesses enthusiastically agreed to showcase the animals in their storefronts.

That single event brought the plight of homeless pets to the foreground, leading to continued public and media engagement that evolved over time:

Through it all, the growth and evolution of PAWS Chicago has been driven by public awareness and the recognition that every person can take action to help homeless pets.

This has culminated into a collective action that has had transformative results, with the killing in Chicago declining by more than 91% since PAWS Chicago’s founding.

Visit the Milestones to read more about each step of PAWS Chicago’s journey. 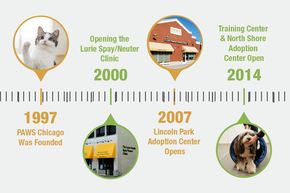 Check out how we've been making a difference since 1997.