The little black and white dog was born in rural Oklahoma. She was one pup too many for the family that owned her mother, so they dropped her off at a shelter; so easily disposed of. She arrived at the overcrowded, run-down shelter when it was inundated with summer puppies. Odds were already stacked against her, but then it became worse. She contracted ringworm, a fungal infection that is highly contagious for both humans and other dogs. 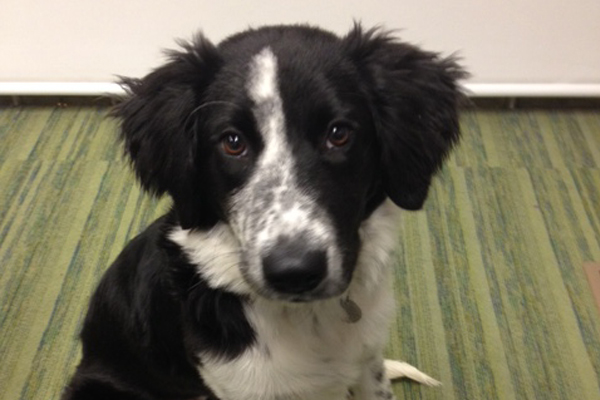 Ringworm treatment is not easy. It is lengthy and requires that the pet be kept isolated for several months to prevent transmission. Traditional kill shelters will not spend the time or resources on a ringworm-infected dog or cat and usually choose to euthanize them immediately. To say her future was bleak is an understatement. She would have been just another statistic.

But something wonderful happened. That very same shelter just happened to be one that PAWS Chicago had formed a relationship with during the Oklahoma tornado missions. PAWS continued to work with them in the aftermath of the tornado and, whenever possible, send teams down to save what animals they could. A PAWS Chicago volunteer saw the little puppy and included her in a group of dogs and cats being transported to Chicago.

Once she arrived at PAWS Chicago Rescue & Recovery Center, she was given a name – Diane – and the veterinary team put together a treatment plan. Only an organization like PAWS, which is committed to No Kill, would make such a commitment to a shelter pup. Her life was saved.

For three months, little Diane endured the uncomfortable treatments necessary to fight ringworm. She could have no interaction with other dogs and, even though volunteers came to feed her and play with her, they were all were required to wear full protective gear and latex gloves. She could only leave the isolation ward for vet visits or to be dipped in lime-sulfur twice each week to fight the infection, an experience that dried out her skin and left her beautiful fur dull and heavy. She figured out how to bounce a ball against the walls and she would play by herself for hours because she had so much puppy energy to burn off. At night she would curl up as close as she could to the glass door, hoping to see people pass by. She just loved people. For months she waited, patiently. As if she knew…

I met little Diane on her first night “out.” She had finally been cleared of ringworm, and was taken to PAWS Chicago’s annual Fur Ball, along with a host of other PAWS pets looking for homes. The noise, lights, people, and colors must have been overwhelming after months in isolation, but she sat quietly, observing everything with soft, intelligent eyes. Long story short, Diane picked me as her person that night. I adopted her and that’s when she became our ‘Kyna’.

I tell this story not only because I am so grateful to have sweet, funny Kyna in my life, but also because it so perfectly illustrates the incredible care and expense that PAWS Chicago goes to in order to treat and care for every single dog and cat that comes through its doors.

For every healthy dog and cat that comes into our Adoption program, PAWS Chicago needs to fundraise an additional $200 above the adoption fee to cover the cost of care and basic medical. However, most pets, like Kyna, require additional medical treatment, which can range from antibiotics to extensive surgery with specialist veterinarians.

I wake up each day greeted by the biggest dog smile you can imagine. For me, that is daily affirmation of why going to work as PAWS Chicago’s Director of Development is so meaningful and worthwhile. And I am just one of the 5,872 people who adopted a pet from PAWS in 2013! Just imagine the lives that could be saved if each and every one of us were to make a donation or encourage a friend or family member to adopt a shelter pet.