A cat’s territory consists of a network of paths that are patrolled on a fairly fixed schedule. Cats will mark territory, objects or individuals by scratching, spraying, depositing feces or rubbing.

When a cat rubs, he leaves a chemical scent that is very reassuring him and inoffensive to humans. This collection of familiar scents helps cats feel comfortable and secure in their home environment.

When a cat is feeling less than confident in his territory, behavioral challenges may arise. Below are some common challenges—and tips on overcoming them.

If your cat is having trouble using the litter box, contact your vet immediately. It could be a medical issue. House soiling is never done to spite the owner. Never punish your cat for eliminating outside of his litter box. Instead, try to understand the cause of the problem. If it isn't a health issue, it may be the result of an undesirable litter box or a stressful environment. Remember, if you have multiple cats, the number of litter boxes you will need is equal to the number of cats you have, plus one.

Spraying is when a cat urinates in his or her environment. It is a territorial response to a change in the home’s scent structure. Cats will revisit and re-mark an area to freshen up a fading scent.

Conditions that may cause spraying include:

Spaying or neutering is effective in reducing this behavior in 90% of males and 95% of females.

Once spraying has occurred, it is important to thoroughly clean the area and neutralize the urine odor. If a cat can smell the urine, he or she will continue to eliminate in that area.

Please note that under some circumstances, it might be impossible to completely remove the urine smell. For example, if the urine seeps through carpet into the underlying padding, the odor may persist. In these cases, it may be necessary to replace the carpeting and padding.

Playful attacks, such as nipping, are not accompanied by vocalization, hissing or growling. A natural reaction to being grabbed or bitten, even playfully, is to swat at the cat. Do not do this. Physical punishment may cause your cat either to fear you or engage in even rougher play.

This is how a kitten learns to inhibit biting when playing with another kitten. If one becomes too rough, the victim will squeal and run away. The aggressor will watch his playmate run away and wonder what happened. Eventually he learns that if he wants to extend his play session, he has to play in a more gentle way.

A cat who “mouths” or bites for attention may have been raised without siblings or a mother to teach him appropriate play. A human may have taught her that hands are, indeed, toys, or she may be frustrated due to a lack of play and enrichment.

Ignoring the cat and withholding attention for 10 minutes or so after behaving inappropriately is a safe and humane method of punishment. By repeatedly taking away the attention the cat craves, he will eventually learn that certain behaviors elicit positive rewards while other elicit nothing pleasurable.

While the cat is learning which behaviors are acceptable and which are not, it is important to keep safety in mind. Play with toys that increase the distance between the human caregiver and the cat, such as laser pointers or wand toys. Remember the importance of play. Consistent play exhausts the cat’s energy reserve and also lessens any frustration he may feel due to boredom. When a cat’s play needs are sufficiently met, he loses interest in his human caregiver’s ankles or hands as a source of prey.

Social aggression between cats sharing a house develops gradually. It starts with hissing and growling, progresses to swatting and chasing, and finally involves attacking and fighting. These disputes generally arise when either cat reaches maturity (8 to 24 months).

If this happens, the victimized cat will usually retreat to a remote part of the house where he feels safe. He may not eat or drink when the other cat is around and ,may stop using the litter box.

The best way to restore harmony is to systematically desensitize the aggressor to the victim. It is the same process you use to introduce a new cat into the household. During reintroduction, be sure to separate them if there are any signs of aggression. Do not shout or scold: It will frighten the victim as well.

Fearful or defensive aggression occurs when a cat perceives itself to be under threat from which it cannot escape.

A cat may exhibit the following body postures:

These are all signals that further approach is likely to lead to a defensive attack. A person or animal who ignores these warning signals is likely to get hurt. It is very important to educate children and strangers on these signals.

The best way to handle a defensively aggressive cat is to avoid him until he calms down. You should not try to comfort your cat by approaching it or picking it up. He should be left alone until he relaxes enough to play, or eat, or shows signs of affection.

Redirected aggression toward humans generally occurs when a cat is in a highly aroused, aggressive state and attacks a person within reach. This state can be caused by a loud disturbing noise, the sight of an unknown cat or having been in a fight.

Cats generally do not redirect aggression unless they are touched or closely approached by a person. The owner should wait until the cat has changed his mood before interacting with it. This state can last two hours or more, but in most cases, it is over in 30 minutes.

After the cat has engaged in another behavior, such as grooming, playing or eating, it is usually safe to approach it. To treat this type of aggression, the arousing stimulus must be identified so it can be eliminated.

Cats in the wild are mostly nocturnal. Domestication has shifted the cat’s activity to be more awake during the day, but they still tend to wake at least twice during the night.

Avoid getting up and attending to your cat if he is making noise playing in the night unless you feel something is wrong. If you rise and feed or play with the cat, you are reinforcing his behavior

For a cat, a potted plant is a snack, an entertainment center and a bathroom all in one. Rubbing moistened black pepper onto the leaves and placing stones on top of the dirt will dissuade your cat from tasting or digging in the plant. Before bringing a plant or flower into your home, be sure it is not poisonous to your cat. Refer to the Common Dangerous/Poisonous Household Items list. 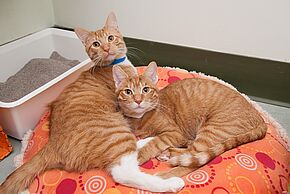 Why cats become stressed and how you can minimize stress. 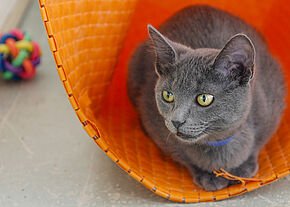 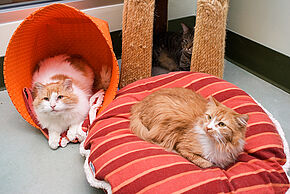 Learning how to interpret your cat’s cues.