The Inspiring Tale of Patsy & Edina 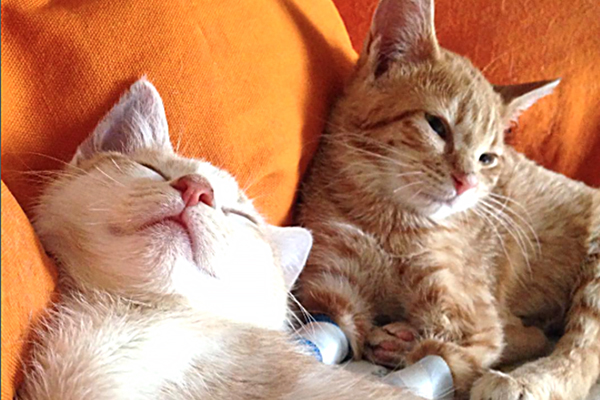 As all social media connoisseurs know, there’s no cure for the blues like cat videos. Meet your next salve for feline therapy on Instagram @patsyandedinagotorehab.

Their names are more formal than their playful kitten antics would suggest: Patsy and Edina. Drama, adorableness and underdog inspiration abound in video and photographic form, making this dynamic duo a must-see for cat lovers.

Patsy is 'the inspector' — curious, independent and sassy, she checks her surroundings thoroughly and is constantly on the move. Edina (Eddie, for short) is the sweeter, mellower sister, who loves being held. Had it not been for PAWS Chicago, these special kittens surely wouldn’t have made it.

Rescued from a hoarder at four weeks old, they came to PAWS as part of a litter of six very weak and vulnerable kittens. When PAWS veterinarian Deborah Link performed a detailed examination, she found that they were underweight, had poor hair coat, and generally were failing to thrive.

Three of the kittens had severe upper respiratory infections, and something had caused the kittens’ muscles and tendons to severely contract. They also showed abnormal neurological symptoms, which worsened to the point where they couldn’t walk or even hold themselves upright, Link said, but she didn’t know a cause. “Their case was very puzzling and concerning. I have never seen anything like it before or since,” Link said.

The smallest of the litter didn’t make it, and the two surviving kittens needed love, nurturing and support to accommodate their disabilities, which were so severe they couldn’t walk, much less make it into a litter box or run and play as most kittens do.

In most shelters, these kittens would have been considered unadoptable and euthanized. But PAWS Chicago’s No Kill mission attracts animal loving heroes. Denise was the perfect foster mom for these special needs kittens: she works at MedVet Chicago Rehab, a facility that specializes in animal rehabilitation.

Denise asked Dr. Beth Ellen McNamara, a former PAWS veterinarian who now runs the rehab clinic, to examine the kittens and provide a plan for their therapy. “Dr. McNamara not only examined them and provided all care pro bono, but also allowed me to bring them in for therapy daily, take equipment home and worked on them herself,” said Denise. “Soon enough, they became part of the Rehab team!”

That’s also where some of the cutest kitten videos come into play — after all, what’s more heart-warming than watching kittens learn to swim, scoot around in assistive devices and, best of all, help each other?

Denise took the lead in their care, staying after work to use the ultrasound machine and working with the kittens at home. But their therapy was a team effort. “Everyone would work with the kittens as their schedules allowed,” she said.

Patsy always had more strength, mobility and drive than Eddie, so she progressed more quickly to the active exercises and swimming. Now, she can walk and use the litter box without assistance.

“Patsy is very motivated to play and explore, so in a way it has been easier for us to rehabilitate her because she is very independent,” said Dr. McNamara.

Eddie still needs some help getting into the litter box, but she’s getting stronger. She can scoot around and has taken a step or two. Kaufman said they’re working on strengthening her front legs so they’ll be strong enough to hold her when she tries to stand up.

“Eddie was sicker longer and is also content to lay in your lap and purr, so in a way she has been more of a challenge,” McNamara said.

McNamara helped Denise design and build an exercise cart for Eddie and “basically continually tweak our plan based on how they are doing,” she said. She holds out hope that Eddie eventually will become independently mobile like her sister.

On Instagram, you can watch Eddie scoot around in that cart, play with toys, and cuddle with humans and her sister. The girls swim, nap, wear adorable sweaters, meet other animals and even explore the lakefront, and it’s all captured in pictures and video.

“They will always likely have disabilities, Ed more so than Pat, but their quality of life under the care of Denise is good,” Link said. “They are playful, affectionate cats.”

Denise said watching the kittens grow and progress has given her persistence, teaching her to never stop trying.

Saving the lives of homeless pets and treating their individual needs often takes a village. From the PAWS medical team to their rehabilitation family to the loving and dedicated foster home, Patsy and Edina showcase what’s possible when we come together for homeless animals. 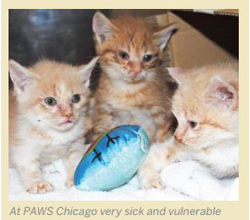 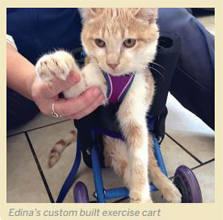 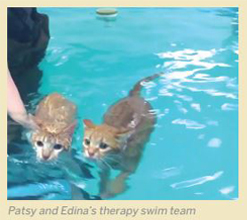 For more pictures and video go to instagram.com/patsyandedinagotorehab