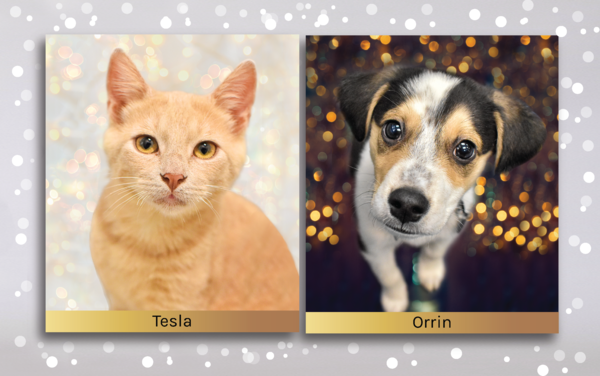 Tesla and Orrin weren’t just chosen for their model looks; they were chosen because their stories exemplify why we need your support this season.

Tiny Orrin arrived at PAWS sick with an upper respiratory infection and lameness in his front paw, limping painfully and unable to walk. He was not quite two months old, along with his six siblings, and all were homeless. Seven wiggling puppies, all ill, are a handful, but thanks to supporters just like you, the PAWS medical team was able to give them the treatment they needed to thrive. The pups were sent to a foster family to get a taste of what it’s like in a loving home. Orrin was treated for his upper respiratory infection (URI) and given the time and care to heal his hurting leg. His sister, Olivia, needed eye surgery due to an injury she arrived with. They were all vaccinated, spayed, and neutered. And now, they are seven happy, 10-month-old, adopted pups ready to enjoy every day!

Tesla came from the city pound with his brother Edison. Both were positive for ringworm, a skin infection caused by a fungus (not a worm). It is similar to athlete’s foot, that easily spreads to other cats and can take months to cure. Although it is challenging to get rid of, ringworm is completely curable if given the proper time and treatment. And yet, to this day, many shelters will euthanizing animals who have it because of the cost and effort involved in treating it, something that would never happen at PAWS or any other reputable No Kill shelter. Thanks to our supporters and network of foster families, Tesla and his brother are ringworm free and living happy lives in their new home.

The holiday season is all about family and because of the support of our community of animal lovers, Orrin and Tesla get to enjoy their very own families for the first time. With your help, we can continue placing innocent, homeless animals into homes of their own this holiday season and beyond. We couldn’t do it without you.

From the bottom of our hearts, we thank you for your support. And so do Tesla and Orrin.

Donate before December 31 to support the life-saving care of animals like Tesla and Orrin. Thanks to our longtime supporter Micheal Sweig’s $50,000 match, along with an additional $25,000 match from animal lovers Wayne and Nan Kockourek, we now have a total match of $75,000!