Beijing Animals Endure the Ugly Side of the Olympics 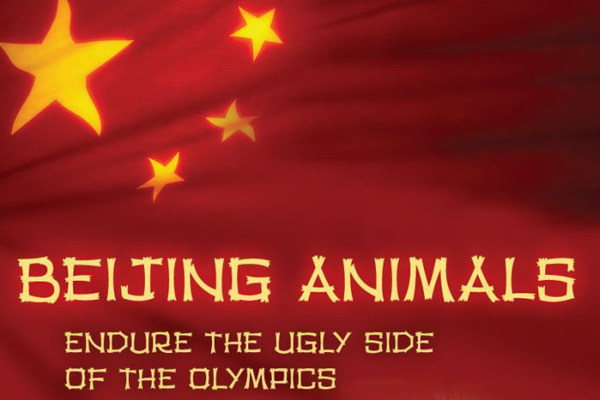 With the summer Olympics just around the corner, images of the infamous torch and flames fuel the world’s anticipation for the largest display of athletic skill, nationalism and competitive spirit. As the Olympic Games commence, tourists from around the world will take in the pageantry of China’s capital city, Beijing, at its finest. Beijing’s culture will be accentuated at every turn—buildings will have been renovated, polluting factories will be temporarily shut down to clear the air of choking smog and the streets will be lined with flowers. Taxi drivers will greet passengers politely in English, as part of a citywide “courtesy campaign,” and sightings of the homeless will be few and far between.

Typically cities throughout the world, having been granted the privilege of hosting the famous games, undergo a “cleansing process” in hopes of shining a favorable light on the city’s “good side.” Beijing is no exception.

As the host city of the 2008 Olympics, however, the Chinese government has added a uniquely cruel twist to this cleansing process—and hundreds of thousands of cats and dogs are suffering as a result. In recent months thousands of cats in Beijing—both stray and owned “pets” have been corralled, crammed into cages so small the animals are unable to lift their heads, and trucked off to what the Free Republic online news source calls “death camps” outside the city. At a large animal “compound” in Da Niu Fang Village the sounds of hundreds of wailing cats can be heard coming from clusters of tin-roofed sheds, although workers near the compound denied there were animals being held, reports the Free Republic.

This “culling” or removing of animals from the city just before the Olympic games is the result of a government campaign that began in July of 2007. By terrifying Beijing residents, warning them of a link between diseases such as SARS, a deadly respiratory virus, rabies, and cats, pet owners began dumping their own animals in the streets, fearing the spread of disease. Once the animals are abandoned, they end up being clubbed to death, or sold to meat markets in cities such as Guangzhou, in Southern China, an area known for its restaurants serving dog and cat meat as delicacies.

Such a practice is nothing new to the Chinese. In July 2006, The Humane Society International received its first reports of a “mass killing” of 50,000 dogs in Yunnan Province, China. The dogs were culled by local authorities, capturing them with a long pole containing a wire hoop, and then beaten to death. Dog wardens and volunteers were paid by local authorities to kill any animal found on the street. This mass killing often included animals that were, in fact, not only dogs registered as pets, but dogs that had been vaccinated. Andrew Rowan, Ph.D., Chief Executive Officer of Human Society International condemned this indiscriminate killing of animals as “unnecessary and inexcusable, especially if they’re already vaccinated. The culling campaigns are in direct conflict with the emergence of a pet-keeping culture in China. Solutions are needed that respect the increasing importance of the human-animal bond in a growing number of Chinese households.”

Such culling practices continued throughout 2006, despite vehement protests from animal rights groups. In November 2006, Beijing implemented a one-dog per household policy to “combat rabies,” – even paying owners 65 cents per dog to kill their own before authorities seized the animal, and attempted to limit owned dogs to those under 35 centimeters. Finally, in December 2006, Chinese President Hu Jinato halted the dog killing campaign due to international protest, attempts to boycott Chinese products—even urging by U.S. House of Representatives Tom Lantos (D-Calif) and Christopher Smith (R-N.J.) to reform the dog cull policies seemed to have an effect.

It appeared that dogs in China were safe for the moment. In March 2007, however, the South China Morning Post reported that the government in the Chongquing district would be “culling thousands of dogs after March 16, as an anti-rabies measure,” following a rabies death of one of its citizens. Dog owners in the area were told to have their dogs euthanized before March 15. Mass killing of the city’s dogs would begin (again) on March 16. Animal rights groups throughout the world continue to protest and search for solutions to this problem, which continues to resurface in China.

Now, as Beijing prepares for the 2008 Summer Olympics, the animal cruelty has returned and includes cats on its list of targets. Christie Yang of the animal charity Animals Asia Foundation, which liaises with other animal welfare groups, sums up the pre-Olympic situation. “We are seriously concerned. We understand that with the Olympic Games the Beijing government is eager to show the world the city in a good light. But capturing and dealing with (animals) in such an inhumane way will only tarnish the image of Beijing and the Games.”

If disease is the issue, and not the glamour of hosting the Olympic Games, why is Beijing resorting to such cruel practices to control the stray population and stop the spread of disease?

Chinese sources actually estimate that pet ownership is on the rise in China. Yet health experts say only three percent of “pet” dogs are vaccinated. In addition, more than 2,000 people die of rabies in China each year. The Chinese Center of Disease Control and Prevention links the surge of rabies cases in recent years to the increase in pet ownership combined with the country’s limited access to rabies treatment, vaccines and spay and neuter resources. Others such as Dr. Francette Dusan, A World Health Organization Expert, blame the lack of coordinated effort between human health, animal health and municipal agencies and authorities. “This has not been pursued adequately to date in China, with most control efforts consisting of purely reactive (measures),” says Dusan.

Whatever the culprit may be, and despite the efforts of numerous animal welfare groups in the country and throughout the world, the Chinese government continues to control its animal population with haste and with a distinct disregard for the animals they might have called companions.