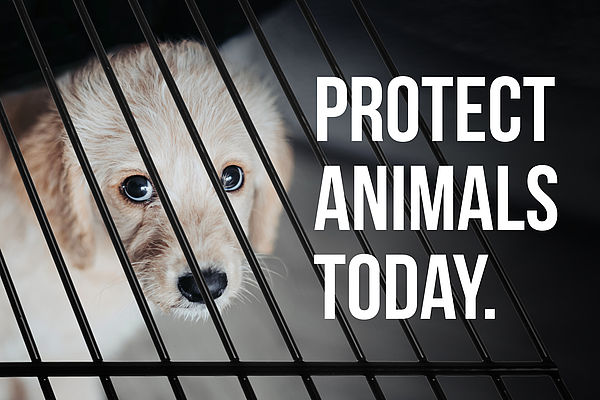 At long last, Chicago has closed the puppy mill loophole! Ordinance 2827 has PASSED the Chicago City Council and will go into effect immediately to protect Chicago’s pets.

Thank you to Alderman Hopkins for leading the way and introducing amended language to close the loophole that allowed three pet stores to exploit a provision in 2014 Chicago Pet Store Ordinance. And thank you to every Chicagoan who called and emailed their alderman to encourage them to support Ordinance 2827 to protect the lives of innocent animals.

With this hard work and determination, we can work together to extend these protections statewide. Right now, HB 1711 is advancing through the Illinois General Assembly, a bill that will ban puppy mill sales in pet stores all throughout Illinois. Visit this page to learn how you can support this statewide effort.

Great news! The Health and Human Relations Committee has voted to pass the Chicago Pet Store Ordinance to close the puppy mill loophole, bringing Chicago one step closer to protecting innocent animals from harm. Next, the ordinance will be on the agenda for vote at the full City Council meeting on Wednesday, April 21.

If this ordinance is passed and the puppy mill loophole is closed, it will be effective immediately and will change the lives of millions of dogs suffering in inhumane conditions.

We need your help to help pass this important measure. Make your support heard in honor of the voiceless. Help close the loophole. Call your Alderman today and voice your support of Ordinance 2827, the Chicago Pet Store Ordinance.

Help close the loophole. Call your Alderman today and voice your support of Ordinance 2827, the Chicago Pet Store Ordinance.

To find your local alderman, please visit this website.

Below, you’ll find a script to guide you in your conversation:

“Hello, (Alderman ______).  My name is (your name) and I live at (your address) as a resident of your ward. I’m voicing my support for Ordinance 2827, also known as the Chicago Pet Store Ordinance. I firmly believe that puppy mill breeders should not be able to operate as sham rescues for the purpose of profit. What is your stance on this amended ordinance that will be up for a vote at the full City Council meeting on April 21?”

After several months on hold, Ordinance 2827 will be called for a vote on Monday, April 12 at 10am in the Health and Human Relations Committee. We need your help to call or email committee members and ask them to support Ordinance 2827 under Alderman Hopkins to stop puppy mill sales in Chicago once and for all. Access the Committee list and contact information here.

With your vocal support, if this Ordinance passes the Health and Human Relations Committee, it will move on to the full City Council for a vote to finally close the puppy mill loophole in Chicago’s Pet Store Ordinance.

Unfortunately, the ordinance amendment was put on hold for at least another month. We will continue to share updates as soon as we receive them.

Right now, you have the tangible ability to change the lives of animals bred, sold, and surviving in inhumane conditions.

Alderman Brian Hopkins has introduced amended language to close the puppy mill loophole in 2014’s Chicago Pet Store Ordinance (Ordinance 2827), which will be heard on Wednesday, January 13th at 10am and will be available to watch live on the City Clerk Website.

The 2014 ordinance sought to prohibit the sale of commercially raised cats, dogs, and rabbits in pet stores. But the goals of the ordinance – cutting off the puppy mill pet store pipeline, protecting consumers, and promoting adoption – are not being met.  According to the Humane Society of the United States, three local pet stores are exploiting the provision of the current law that allows them to sell rescue animals from legitimate rescues by using sham rescues that act as middlemen between the stores and puppy mills.

Paula Fasseas, the Founder and Chair of PAWS Chicago, testified on behalf of the 2014 ordinance and continues to uphold these same beliefs: “This [ordinance] is so important to ensure that the Chicago community does not financially support inhumane and unethical breeding, where dogs are overbred and forced to have litter after litter while being kept in deplorable conditions with little to no veterinary care or socialization. We will take every step possible to end these practices.”

As stated by Alderman Hopkins in the Chicago Tribune, “If you could see the inhumane manner in which these puppy mills operate, no Chicago pet owner that I know would want their money to go to support an industry like that… it’s abhorrent, it’s offensive, and the only way it can exist is in the darkness.”

Thanks to the Humane Society of the United States, Chicago Animal Care & Control, and the Puppy Mill Project for their work on this important legislation.

What is wrong the current ordinance that passed in 2014?

Chicago’s current pet store law allows pet stores to sell dogs, cats and rabbits as long as they are sourced from shelters and rescues. Three local pet stores continue to sell weeks old, designer, and purebred puppies for thousands of dollars by buying them from sham rescues.

Does this ordinance repeal the existing ordinance or simply close a loophole?

This bill closes a loophole. The City Council overwhelmingly supported the original ordinance, this ordinance would put a stop to the games these few pet shops are playing.

Who will be opposed, and is that the same opposition as before?

The three pet stores that have been skirting the law and selling puppies for thousands of dollars to consumers under the misleading claim that these puppies are “rescues” will oppose the law. In fact, they still want the City to allow them to go back to the days where they could openly sell puppy mill dogs.

What does this mean for consumers or people looking to get a dog?

Chicago and its surrounding areas have a vast network of shelters, legitimate rescues and responsible breeders who only sell directly to the public and never through pet stores. These humane sources are far better for both animals and consumers.

Why not do this at the State level?

Will this put the pet stores out of business?

No. This ordinance will ensure the goals of the 2014 ordinance are met. By allowing stores to host adoption events, the ordinance allows stores to draw in consumers with adoptable pets, which will likely result in boosts in sales of food, collars, leashes, beds, crates, toys, and other items consumers will need.