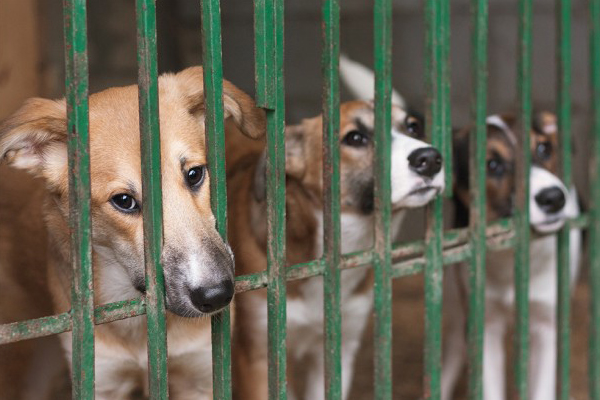 Great news! The amendment to the Cook County Companion Animal and Consumer Protection ordinance, which would effectively dismantle protections against puppy mills and inhumane breeding practices, has been pulled from Tuesday’s Cook County Board of Commissioners agenda. Although the amendment could resurface in the future, it is currently not up for vote.

We will continue to provide updates as information is available.

Several Cook County Commissioners with high volume pet stores in their districts along with representatives of pet shops and the puppy mill  industry, want to make some changes to the puppy mill ordinance, passed last month, which would seriously impact the protections prohibiting pet stores from selling dogs, cats and rabbits purchased from for-profit breeders and puppy mills.

The law currently mandates that retailers can only sell rescue animals obtained from government pounds, humane societies or animal rescue groups. Unfortunately, the amendment that would allow Cook County pet stores to continue selling animals who originate from for-profit mills.

HOW YOU CAN HELP!

If you live in Cook County, please contact the Cook County Commissioners listed below and let them know that it is critical to animals and our community that they uphold their original vote and not support the new Companion Animal and Consumer Protection Amendment.  The lives of helpless animals depend on your support.

We know you are as interested as we are about Illinois SB 4065 sitting before the state senate.  Some changes have been made to the bill since originally introduced and we are working hard to get more information about the potential implications and whether or not those revisions compromise the originally foreseen benefits to animals and our support.  We will provide updates as soon as we know more.

Several Illinois lawmakers are taking on the inhumane practices of puppy mills and commercial breeding.

“This proposal will help end inhumane puppy mills, protect pet owners and help shelter animals find loving homes,” Governor Quinn said. “Cook County will soon offer this humane protection and together we can build on that momentum for families across Illinois.”

Senator Kotowski says he introduced the measure because he believes it will work to ensure safer and more humane treatment of pets.  If would also work to guarantee that people are buying healthy dogs and cats.

“Pets are a part of many families, and this legislation will help when choosing one of these new family members,” said Representative Burke. “It will also reduce the number of shelter animals and bring more healthy pets into Illinois homes.”

If passed, Illinois would be the first state in the country to take a stand against the inhuman breeding practices of puppy mills.

Contact your Senator or State Representative and let them know how important the passing of this law will be to animals and our community.

Read more at Chicago Now or view the CBS coverage.

Following in the history-making steps of Chicago, The Cook County Board of Commissioners unanimously approved the Cook County Companion Animal & Consumer Protection Ordinance. The ordinance will outlaw the sale of dogs, cats and rabbits sourced from inhumane breeders or “puppy mills” that prioritize profits over the well-being of animals, where the vast majority of pets sold in stores originate.

Once the law goes into effect in October 2014, pet stores will be allowed to sell or adopt pets from licensed shelters and small-operation breeders with five or fewer female dogs. Further, stores that violate the ordinance will face a $500 penalty for each animal sold.

Concerned about the inhumane conditions at large breeding operations, Commissioner John Fritchy, who sponsored the groundbreaking legislation, said, “If I cannot regulate them directly because they are out of state, we’re going to try to cut off the demand for those dogs and cats here and, at the same time, reduce the number euthanized in shelters.”

The Chicago City Council passed landmark legislation today that will make it illegal for puppy mills and puppy mill operators to do business with pet stores within city limits. The Companion Animal & Consumer Protection Ordinance passed 49-1 and will prohibit pet stores from selling puppy mill dogs, cats and rabbits from inhumane, for-profit breeders.

“This is a groundbreaking day for the City of Chicago,” says PAWS Chicago founder, Paula Fasseas. “Thousands of mill pets are brought into Illinois each year, while thousands of cats and dogs are euthanized, simply because they are homeless. The way these mill animals have been treated is unconscionable.”

With the passage of this ordinance, Chicago joins 45 other cities across the United States and Canada who have taken a stand against the sourcing and sale of animals from mills who are raised in inhumane conditions and are often wrought with disease, congenital issues and poor socialization.

PAWS Chicago would like to thank City Clerk Susana Mendoza, for introducing this important ordinance, those who testified in its favor as well as the aldermen who passed it.

The Chicago City Counsel License Committee recommended the passage of the Companion Animal & Consumer Protection Ordinance which would limit the sale of dogs, cats and rabbits from pet stores to animals sourced only from shelters and other humane adoption centers. Read more about today’s vote in the Chicago Tribune.

The final vote will take place at approximately 10:30 a.m. on Wednesday, March 5 at City Hall and is open to the public.

The Chicago City Council will soon vote on a measure that would prohibit pet stores from selling puppy mill dogs and other animals sourced from for-profit breeders.

It’s called the Companion Animal & Consumer Protection Ordinance and was introduced on February 5 by Chicago City Clerk Susana Mendoza.  Aimed specifically at curbing the millions of puppies raised in the neglectful, inhumane and unsanitary conditions of puppy mills, the proposed legislation would limit the retail sale of these animals by allowing pet stores to only sell animals sourced from shelters and humane adoption centers, such as PAWS Chicago.  It is estimated that 99 percent of animals in pet stores come from puppy mills that aim to maximize profit in any way possible.

If passed, Chicago would join 45 other cities in the US and Canada in protecting their animals and consumers.

PAWS Chicago is urging our community to support of this legislation by signing a petition being circulated by City Clerk Mendoza.

Take action today and help save a life. Sign the petition here and call your local Alderman.

More about the Ordinance and Puppy Mills

It is estimated that 10,000 puppy mills produce more than 2,400,000 puppies a year in the United States, according to the Companion Animal & Consumer Protection Ordinance, and that most pet store puppies come from puppy mills.

Animals raised in puppy mills are held in neglectful, inhumane and unsanitary conditions without proper food, water, shelter or veterinary care. Once an animal in a puppy mill is no longer considered profitable, they are often euthanized.  According to Mendoza, banning the sale of puppy mill dogs not only promotes the welfare of animals but protects consumers and would potentially save City tax dollars by increasing animal adoptions and decreasing costs associated with euthanizations.

“We pay dearly for failing to curb the sale of puppy mill animals. This legislation is going to save the lives of dogs and spare pet owners the heartache and cost of bringing a sick animal into their home. Also, I’m happy to say that this addresses a big challenge the City faces in terms of finding resources to care for strays and abandoned animals,” says Mendoza.

For more information, please visit the Office of the City Clerk’s website.

If you live in Chicago please call your Aldermen and say thank you for supporting the Companion Animal & Consumer Protection Ordinance. Below is a listing of all the Aldermen by ward who are currently supporting the ordinance.